In 1926 Ardé Bulova, the son of Joseph Bulova, offered a prize of $1,000 to the pilot/s who would be the first to succeed in a nonstop flight across the Atlantic. Sometime around the same time I believe Bulova were sending to each pilot/s who registered for the Raymond Orteig prize, a Bulova watch known as the 'Conqueror' along with a letter offering the prize money.

#This was later described by a Mr H.H Taub in an 1930 newspaper article. After receiving the watch from Bulova sometime before his historic flight, Lindbergh wrote a letter thanking them for the prize offer and stated in his letter of thanks that "The Bulova Wrist Watch, which it is my pleasure to wear, keeps accurate time and is a beauty." I believe this happened pre his historic flight.

On June 11 1927, upon his return to the US aboard the Memphis, the Bulova Watch Company presented Charles A. Lindbergh with another Bulova watch and the $1000 prize money for making the first non-stop flight from New York to Paris.

On June 17 1927, Bulova started to advertise the sale of the Lone Eagle watch, which included a facsimile of the above letter. The letter for Bulova no doubt catapulted sales of the now famous Bulova Lone Eagle Watch in 1927 to the point were it is now considered one of Bulova greatest collectable watches.

As a modern day owner of one of the original 1927 Lone Eagle watches I am fascinated with its history, both known fact and theoretical guess work.

For a number of years there was some confussion around how many Bulova watches were given to Lindbergh and at what period they were given. It was a puzzle worthy of investigation and with many passionate collectors searching through newspaper archives, bits of the puzzle would start to fall into place.

However on April 22 2010, a large piece of the puzzle came my way in the form of an email from a gentleman by the name of Gordon Bell.

Gordon Bells great aunt was married to one Richard Blythe, a Canadian World War I & II pilot who died serving his country in a Royal Canadian Air Force training accident in 1941. Shortly after Richards death his wife returned to Texas, were in 1948 she passed on to her then 14 year old great nephew a treasured family possession....a Bulova watch.

Along with the Bulova watch, Gordon also received from his great aunt a book. The book is one of the most famous and widely sold books and has also endured the test of time as a popular read. The book was simply entitled 'WE', although what made this book particularly special was what was written inside.

A hand written message to Dick Blythe from Charles A. Lindbergh that reads "To Dick Blythe With best wishes Charles A, Lindbergh". This signed book is now in the safe keep of Gordon's son-in-law, one Major General Larry New (USAF retired) who was also an renowed F15 pilot. 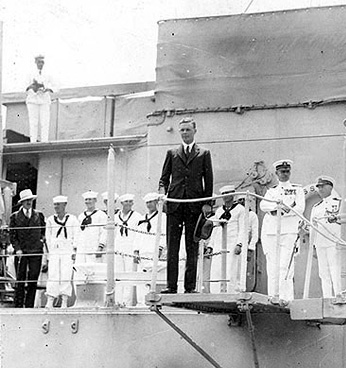 Richard Blythe was not only a well renowed pilot himself, but was also one half of the famous duo, Blythe and Bruno. Harry Bruno and Richard Blythe ran a public relations firm which was employed by the Wright  Whirlwind Company that made the engine for the 'Spirit of St Louis' to assist Lindbergh with the press and public events, both in the lead up to the flight and afterwards. In fact it was Richard Blythe that sailed to Paris on the USS Memphis shortly after the famous flight to fetch Lindbergh back to the US. This photo shows Blythe standing off to the left of Lindbergh aboard the US Memphis upon his return to Washington on June 11, 1927.

Over the next decade or so both Richard and Charles remained close friends. It was this friendship that brings us this story today and the watch and book that was given to a young 14 year old Gordon Bell back in 1948. 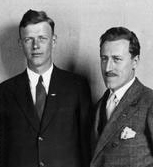 This photo shows Richard Blythe with Charles and another shows a signed autograph photo of Lindbergh to both Dick and Harry. Full images can be found on the Wisconsin Historic Society's website.

How it was that Richard Blythe (Gordon Bell's great aunt's husband) came into possession of this watch  is not exactly known, but from the friendship that existed between both Charles and Richard one might assume that it was simply a gift.

Thankfully the forsight of a 14 year old boy now sees that the watch has survived some 83 years and reminds us of this great event and friendship. When Gordon received the watch from his great aunt it was well worn, missing the crystal, a hand and the crown. It has since been fixed by a local jeweler, although sadly with the wrong hands.

However, what makes this watch a truely amazing and historic timepiece (well in my opinion it does) is what is engraved on the back case.

myBulova.com is both pleased and honoured to present to you the 1927 Bulova watch, as presented to Charles A. Lindbergh by Ardé Bulova for the first non-stop flight from New York to Paris.

You can also read more about the Bulova Lone Eagle watch here.

Many thanks to the owner of the watch Gordon Bell and to David Garren for the photos.