I must disagree with Your analogy of the IHC 'SKY KING' ID as discussed in this thread:

Closer scrutiny of the vintage ad for the Bulova 'SKY KING' will reveal that the Watch depicted does indeed match the 2nd, more cleanly visible ad of the same. Circled below are My observations of the Second ad:

1. Chevrons appearing on a Silver section of the Watch Case before the lugs.

2. A bracelet that differs slightly from the Watch shown in the IHC 'SKY KING' box. Here is another 1930 Sky King ad. Notice that the ad also advertises Bulovas best sellers, including the President and the Lone Eagle in the mens department. You really can't see the intricate engraving details of the ad watches. The 1930 President, Bulovas top drawer watch from 1925 to 1929 maintained the same case design thru 1929. In 1930, the case engraving design changed to an XXIXXI engraving pattern, emulating the engraving pattern of the 1928-30 Lone Eagle XIXIXI. In 1930 the Sky King watch was introduced to honor all T.A.T Maddox planes flying in conjunction wiith the Pennsylvania Railroad spanning the continent in forty-eight hours, fly via Bulova time. In effect introducing the second Bulova commerative watch, after the Lone Eagle. Checkout the ad and study the details in pictures of the real watches. 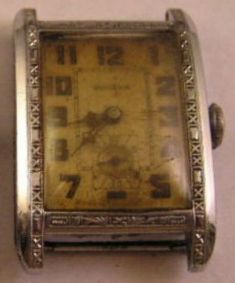 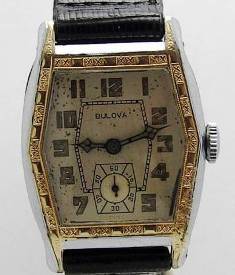 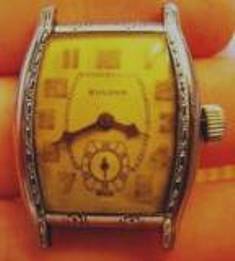 These watches were best sellers for Bulova and they are still available in auctions today. Not hard to find at all. Think about it! You don't see very many of the model that somehow attained a false identity around today. I counted only two in the last 3-4 days & the one in the database is a Frankebully. I think the general availability of these watches pictured immediately above speaks volumes.

So how does one explain the different hands and Gold applied numbers in the 2 ads? It seems that from 1929 to 1931 the style stayed the same but certain features changed? 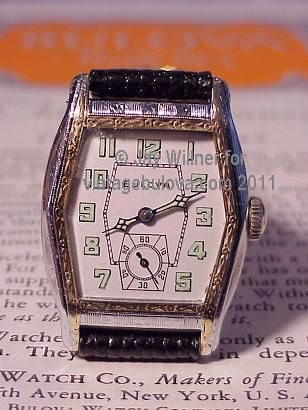 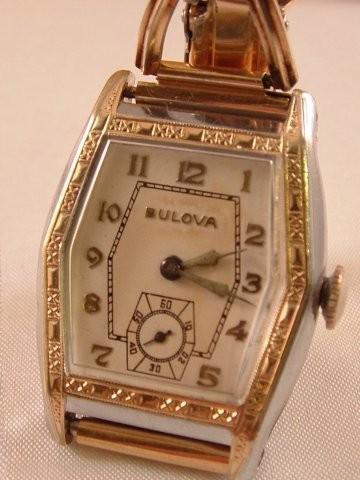 The Sky King was produced in the same case in 1930 & 1931 only. Varient dials were available in addition to the Lum dial. The raised gold dial with modern hands like yours (nice little gray lum touch on the hands by the way). I found a black dialed Sky King with gold minute & seconds tracks with cathedral hands (it's in the database).

I think Old Ticker nailed it on the head.

Jays Sky King (assumed all is original except the re-dial) would be a prior version to the more common Sky King we see a number of with the XXI.

We see this change in dial and hand design on almost all the Bulova watches that carried over from the late 1920s to the early 1930s.

The Sky Kings above are no different. It makes sense.

The change in dial and hands certainly suggests that the model has changes made to it to bring it into line with Bulova new casing, dial and hands.

The dials moved from open painted numbers and hands to closed raised numbers and closed solid hands. Why is it therefore not conceivable that the case may have also change.

I would still have to disagree.

The ad Wayne shows above appears to show a Watch (the resolution is poor) with the same details as both of the prior Bulova 'SKY KING' Saturday Evening Post ads shown in this thread (same image used?) with a Chevron/carved detail on the Silver end section of the Case.

I would agree that a raised Gilt numeral / Black modern style hands variant exists, but in the same Chevron detailed Case, as shown in the highlighted ad used for illustration.

To say that an XXI engraved non Chevron 'SKY KING' model was produced is pure speculation as there is ZERO evidence to support this, just guesses, wishful thinking and misssed identifications.

'SKY KING' is shown to have a Two tone Case with a Fish engraved pattern and Chevrons at each end. Very nice write up Wayne, but the Watch image You show is not a 'SKY KING'

The ad above is the only clear factual evidence We have.

As far as I am concerned Jays Sky King is the first release of this model and all the other Sky Kings we commonly see with the XXI are later editions.

Remember that during this time Bulova didn't always update their ads, but instead continued to use existing drawings. This may or may not be the case with the Sky King, but we see nothing else like it during this era that could suggest it's anything other than the Sky King.

As always I'm happy to be correct upon receipt of evidence.

The ad above certainly uses the same case design as Jay's case (there in no arguement ther what so ever), but I'm still not going to rule out that later versions differed.

Case in point, there is not one single vintage ad showing the corner cut lone eagle with the common eagle head design....and yet we all accept it for what it is.

Where the hell are the Eggspurts when you need one? LOL

I hope you realize that the first watch in the database listed as a Sky King, does not have the correct dial. You are doing a great job defending what you think is right. Do you own any the Sky Kings in question?

If you own the watch you presented as a Sky King, would you please provide movement information, date stamp & case inside information please. 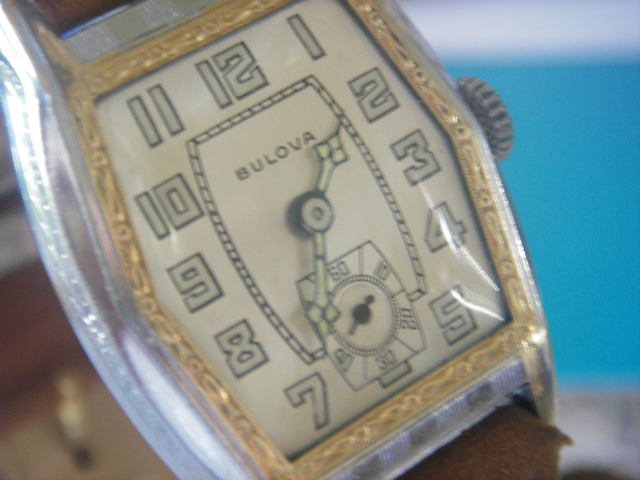 This case is a Sky King but the dial is not, it does not fit the shape of the case plus it has the obscured six.

It looks like something from a Richard, Govener, Banker or LE because it has a Tonneau shape minute track rather than the correct Hexagon shape like Jay's or mine.

WE are (supposed to be) the experts.

The Movement in the Watch from the database I show above is also wrong, 15 Jewels vs 17J advertised, a clear indication that the Movement and Dial have been swapped at some time.

The Case is definately 'SKY KING' as advertised and any Case variation from the 'SKY KING' ads are 'UNKNOWN's at this time.

We see this pattern in other models as they changed design to keep up with market trends and new styles. Why should it be any different with the Sky King. I believe We see the Gilt numeral Dial in one of the lower resolution ads and  I do agree that Case designs change over time but in the same context We also see similar Cased Watches produced within a given model Year across the board, particularly in this era.

My problem with the 'evolution' theory is the Watches shown above are are all dated 1930 -31 and the Saturday Evening Post ad of the 'SKY KING' dates to late 1930.

We can all agree to disagree until such time a new ads are discovered proving one way or another.

So in that case we should all re-ID our Corner Cut Lone Eagles as Unknown.

My concern is that like other Bulova watches of this era Bulova did not update their adverts and instead chose to use old or previuos deisgns throughout the marketing of a particular model.

If this is the case with the Sky King we may never find an ad showing the XXI design and thus always have this watch ID'd as unknown.

Bulova did not produce any ads showing the newer design.

I suggest we start a new string if we are going to discuss different watches. It distorts the strings so much when you change the subject watch in the same string. We don't know which watches you are talking about.

Wayne, this whole string has been about the Sky King. My reference to the LE is to highlight the important fact that Bulova didn't always have accurate ads depicting what a watch exactly looked like.

This string is about working out if the XXI Sky King is in fact a Sky King.

I second that admin,

If you are a panel member and you feel it deserves 3 stars, mark it as such, 2 stars if you are on the fence and want more proof, 1 star if you disagree, or don't vote...After discussion, the panel will decide...thats why they call it a panel...Right?? Majority rules, others drool, (or something like that) otherwise there would be a King or Queen and they would decide without any input! : D

Sorry I lost it for a minute there!

Regardless of our differing opinions it would be really nice to figure this out so we and everyone else can say for certain or not that the XXI case variety is a Sky King. Future visitors will look to this site as evidence one way or another of what A Sky King looks like, so I really like what we are doing here.

* In reading the referenced and 'highly touted' Internet Horology Club  'SKY KING' thread (linked above) it clearly reads that the author begins the thread with an empty box. They then add to that empty box a Watch which they believe to be the 'SKY KING'  - unfortunately it was not. The above ads show the progression in model variation from lum dial and hands to raised numbers and closed hands. I hope one day we can finally put this one to bed.