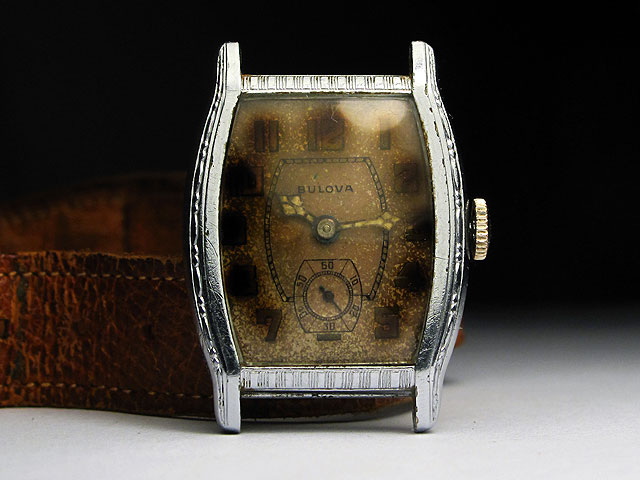 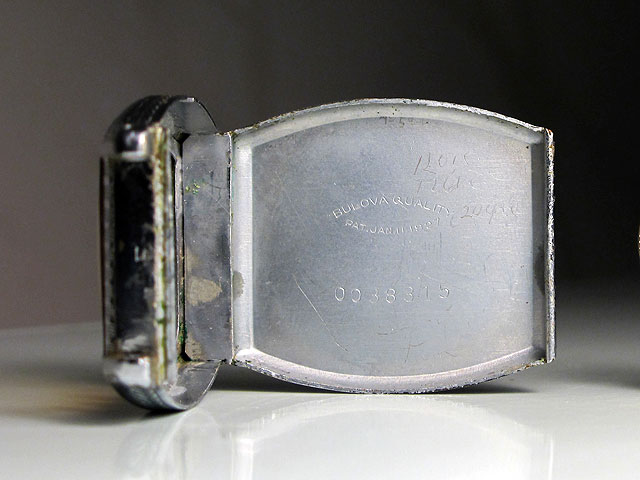 Nice radiation burns on the crystal. That stuff was really hot back then.

Ouch, this really make you think about how much nasty stuff the radium paint pumps out!!

interesting model, not something we have seen a lot of before. Search begins.

Sure Stephen, just think what your wrist would look like if you wore the same exact watch, day and night, never ever took it off for 50 years......I rather don't worry about that radiation.

is this the 'ALBERT'?

Tentative Albert for me......The case engraving is very unique and certainly looks to be a match.

It appears it is the Albert, I wish we had better resolution on those newspaper ads.

At the risk of sounding like a broken record, I offer my usual Radium comments:

That stuff was hot back then, as John mentioned, and is just as hot now. The half life of Radium is 1602 years, so not much has been lost, save the decay of the other compounds in the paint that used to flouresce under bombardment of the radiation.

The main danger from this old Radium is ingestion, as the paint flakes and breaks away from the dial and hands. The body sees the Radium as Calcium and imports it to the bones, where it can cause a terrible pain that doesn't let up. The dose for this is unknown, but is considerably more than would be accidentally digested by handling an old watch. The Beta and Gamma particles exit the watch from the front, and are blocked to the rear by the dial and movt. Once the dial has been cleaned, it remains radioactive.

Radium was still used in wristwatch and pocket watch dials until the early 60's and in clocks til the late 70's.

Albert works for me.

So it is "Albert" dating from 1930.
Is possible to clean those spots on crystal, or I must change it ? Or is better to leave it like this?
The post of Reverend Rob really scared me, should I bury this watch?