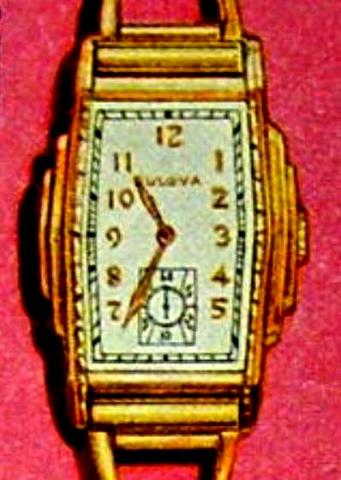 Very interested in this watch William thank You for posting it. I have in My possesion a similar piece which, due to Your posting, am in in the process of preparing to post. The unusual and  most notable traits in the artists rendition to Me of this model is the absense of any engraving on the upper lugs of the case. Error or is this how it was produced?

Perhaps it was a calculated ommission? (To illlustrate that there were model variants?) Or maybe it was indeed, an oversight?? Or it could also have been an attempt at lighting "contrast," on the part of the illustrator??? The lower resolution on both the ad I copied off eBay and what appears to be the same ad Stephen posted on the "Grandfather's Lone Eagle" post... both show the watch hands, at the same positions. It's too bad eBay switched to .png (Photoshop) images, as when converted back to say .jpg to post here... you LOOSE 2/3s of the resolution! (I know Stephen... images eat SPACE!)

It was actually quite common to design (generally, dual release) "plain," as well as "engraved" case aethetics... This practice semingly allows/ed for more "freedom of choice," for the buyer? However the main objective was/is always enhanced profitability... (i.e. Charging more for a fancier case, dial, or more movement jewels, gold filled band, etc. Price tiers, are actually fairly old school. (What is planted in the mind as the best and most desirable... invariably, costs increasingly MORE!)

Slightly "off topic," but I think it warrants mentioning the "mentality," behind marketing/ad copy, as well?

William, for some time, before the 'Bulova Bug' really bit and began to realize the countless number of models produced, I was under the assumption that this style was indeed the 'Lone Eagle' therefore I have this and the other variant (lol), engraved case, non engraved case. Not perfect in any way, but examples nontheless. I just uploaded what I have in the engraved case style, as an 'unknown' for the time being. Thanks once again for sharing.