Date of manufacture is only an estimate, no date code on back, but the vintage watch dealer it came from believes it was from the 1940s.

Unknown model Bulova women's watch, 14K Pink Gold filled, original Pink Gold  filled early scissor expansion bracelet, original Cylinder Thick Glass crystal.  3 enameled hour numbers (3, 9, 12, and 8 what appear to be round crystal markers for 1, 2, 4, 5, 7, 8, 10, and 11.  Rectangular second hand window at 6 o'clock position.  The case shape is actually what Cartier introduced and christened a "Tank" case in 1917, but nobody can legally use that trademarked term except Cartier.  So whatever model designation Bulova gave this watch, it wasn't "Tank".  Tear Drop lugs.  23mm wide by 38mm lug to lug.  Overall condition 90%.  If anyone knows just what model this watch is, please contact me. 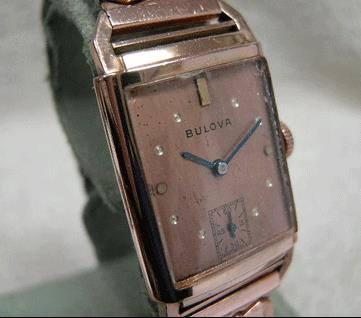 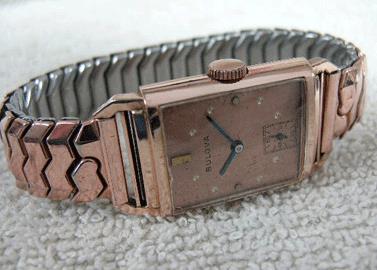 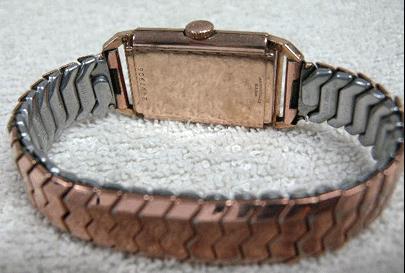 Bulova President, a very nice example. Year to be determined.

tmaca, a close photo of the movement and case back would nail down the year of manufacture.

Bulova President, a very nice example. Year to be determined.

tmaca, a close photo of the movement and case back would nail down the year of manufacture.

Strangely, there's no date code on the back.  And I know the guy I got it from had it open (Boomer, at boomertime.com), because he always does a complete refurbishment before he sells anyhting , and since he knew it's factory signed on the movement and inside the case, and he knew the exact movement that's in it.  But it seems he didn't find a date code inside, either.  He had it rated at 90%, so that's what I use, but, personally, I'd call it at least 95%.

And is it even possible to add a new photo once the thing has been published?  If so, how?

ditto and it is not a ladies watch.

ditto and it is not a ladies watch.

Probably.  But even though men did wear such small watches back then, the band it came with did seem somehow a bit too ladyish, and besides I got it for my wife.  But I guess it was originally meant as a man's watch.

With Bulova watches prior to 1949 we generally use a combination of movement date codes along with serial numbers to establish year of manufacture. In 1949 Bulova began using the letter/digit date code on both case backs and movements that is still in use today. If there is a year or two discrepancy we assume the latest to be the year of manufacture.

I will send you my email address, if you send me the photos I will place them for you.

If there WAS  a darte code, i wouldn't need someone tro read it for me.  I KNOW Bulova's date codes, which didn't really start being RELIABLY used, I believe, until the '50s, with the letter L. Before that, sometimes there was one, sometimes not.  And as I've said several times, THERE IS NO DATE CODE ON THE WATCH.  All there is is a serial number.  Before they started using the letter/number code, they often had a symbol on the movement indicating the decade (1920s, for example, is a triangle), and the first digit of the SN is the specific year.  Usually.  But there are exceptions, including letter/number codes sometimes.  And in actual women's  watches in the '40s, which tended to have SNs that start with a letter, you can't usually even rely on that.  Given that the President was a '40s watch, and actually a man's watch, we don't need to even look for the symbol on the movement (according to Boomer, there is NO date code, like maybe K2 or something, on the movement) and there is NOTHING on the case.  BUt given that the first digit of the SN is a 9, and that we know it's a '40s watch, there's an excellent chance it's a '49, the last year of the 7AK movement.  But I can't send you photos of something that doesn't even exist.

But I'll go ahead and open the case in the next few days, as soon as I get a magnifying glass.  My eyesight isn't good enough anymore for really small stuff.

And the only pics I can find anywhere of a Pink Gold President, with the identical dial, are all 1945s, excepot ont I found labelled asd 1944 and one labellead as "early" 1945. So it's confusing.

Agree with President. Earliest ad with this model is 1940, so not sure if this could be a 1939. It does appear this case was in use in 1949 as well. Need to know the movement datecode to narrow the date down.

Looking at the case serial number, it appears your number 9 starts on the crown side; but typically these are read from the opposite side of the crown (with the BULOVA being up-side-down) does it read that way with a number ending in 6?