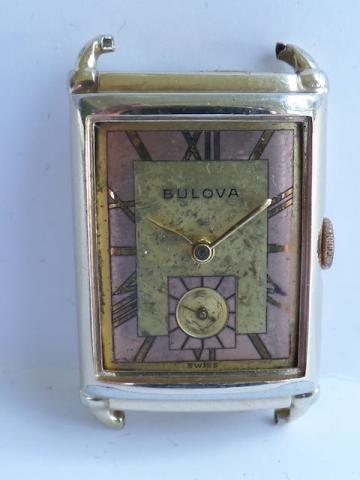 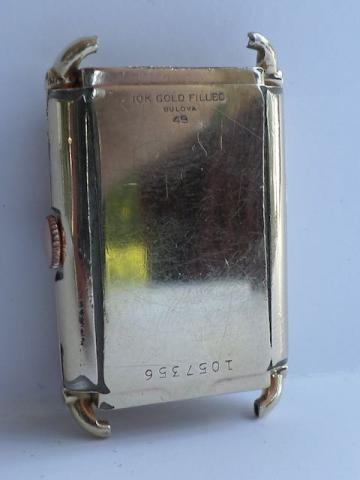 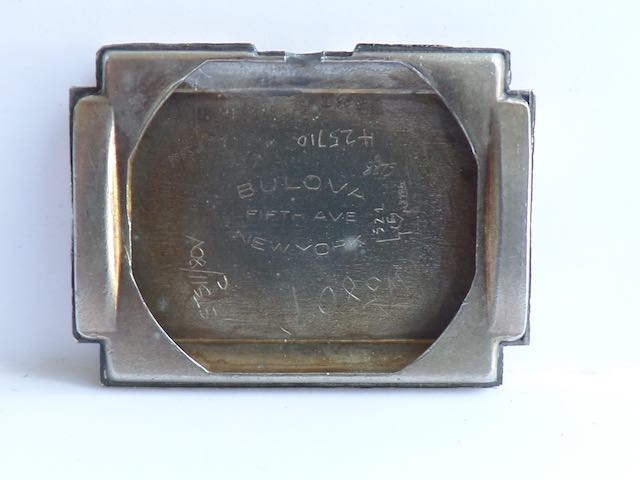 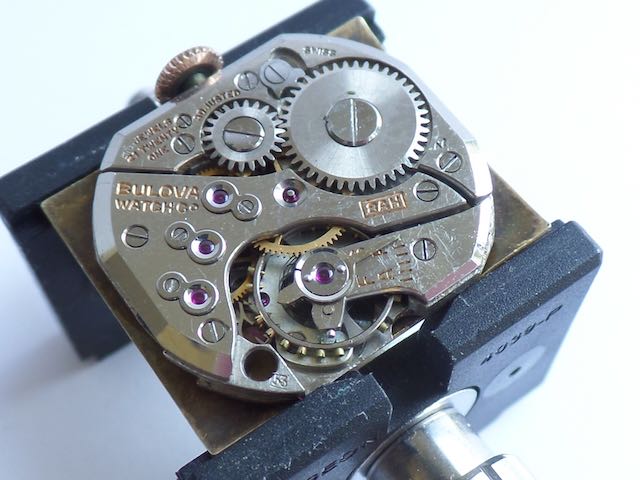 Ouch, this poor little Bulova has lived a tough life. Case is President I think, looks like the early 40's version but I don't really see any adverts past 1945 or so. I suspect a re-dial as I don't see this exact style either. This one is close.....

I'm comfortable calling this one a President based on the case. The President line used this case as late as 1947 in this ad; it is also similar to the slightly curved Spencer, but they are different. The dial style was popular in the early 40s, but it is not a match to the Pres 'F' dial, and I could not find a match to this dial in any ads.

1949 President, perhaps tentative based on no ads.

Geoff, the watch is certainly been well "loved". Look at all the watchmaker marks on the back of the case.

One of the factors that may be in play in identifying some of my watches is that they are coming from the Canadian market. Not sure what the dbase is for Canadian watch ads but there could be subtleties between models and the market they are in.

There are subtleties, usually just a slightly different name. Miss Toronto,  Canadian Girl vs American Girl, Canadian Nurse, Canadian Clipper, for example. Canada has Senators, so that stays the same, but the only Presidents we have are the presidents of companies, I don't think there was ever a 'Minister' or 'Prime Minister' model watch.

Interestingly, the model 'Sister Kenny' was named after an Australian Bush Nurse who pioneered a Polio treatment in infants. The 'Sister' title refers to her Military rank, she was not a Nun.

And in case anyone was wondering, the 'American Girl' was the plane that Ruth Elder flew to within 300 miles of the European coast in October 1927. Her attempt was the first by a woman, inspired by the Lindbergh flight. The American Girl developed an oil leak and she and her co-pilot had to ditch.

But anyway, my point is that Bulova certainly was no stranger to naming watches after foreign persons or titles.

Rev, there is one 1960 Canadian ad that shows a Prime Minister for similar President models; looks as though that US model name was changed for that market. Good info, I didn't know about the American Girl plane; that is a model name that Bulova used for several decades going back to the 30s.

Ok, now that is interesting!

I imagine to confirm it you'd need the box and/or tags, but now I have a new rare one to look for!