all ads show and describe the 'SENATOR' "A" variant as being Sold on a 'luxury expansion band'. - It's possible the Watch could be designated a different variant when (if) Sold on a Leather strap.

Whilst I do tend to agree with the notion that the 'A' had the expansion band, all the ads we see thus far show this case shape as the 'A' as well.

There are other Senator models that are different in shape and have a different variant letter.

Ditto Stephen and Mark for my 2 tick tentative...

The band does make a difference in this models case. According to this advert the watch is actually a "Champion", although I'm not sure what is meant by 'plain case'. 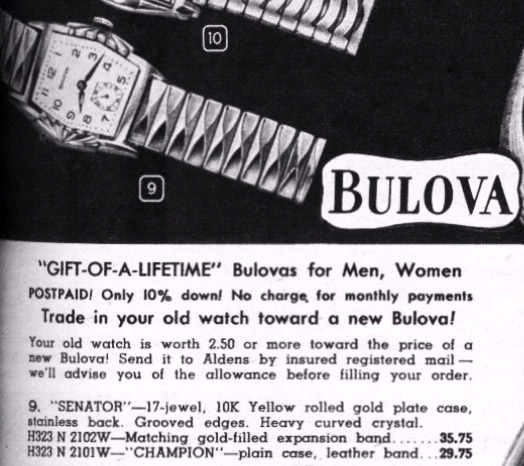 No way is it the Champion.Take away the "grooved edges", and you are left with a case very similar to the 1953 Nugent, and probably what the Champion looks like.

In ALL other ads for this case shape between1954-1957, it is referred to as the "Senator", and in ALL the ads they have expanding rolled gold bands. When othe case derivatives of the Senator appeared in 1955 they are all given designation letters, or confusion would ensue. In THREE different ads this case shape is referred to as the "A". Maybe some letter designations refer to band type, but not in this case. This is obvious if properly researched with the data we have at hand. No axe to grind, no hidden agenda, no trying to blow smoke up anyone's backside. Just cold hard facts.

No way is it the Champion.Take away the "grooved edges", and you are left with a case very similar to the 1953 Nugent, and probably what the Champion looks like.

Bobbee, you just made the statement that this is not a Champion, therefore you must know what the Champion looks like and have evidence to prove this statement. We would certainly love to see this evidence.

Why are you taking away the grooved edges? Is that your take on what the advert means by plain case? Why would the advert group a totally different watch together with this one. That makes no sense and we have no evidence of it being done before. In fact we have evidence showing a number of examples where variants of a watch based on its strap are grouped under its ad listing.

If you are talking 'cold hard facts' then it does not get any colder than this. We have an advert indicating that this same watch (with a plain case, whatever that may mean and we can't assume anything here) with a leather strap is called the Champion.

I agree with the statement that ALL other adverts for this case label it as Senator or Senator "A". You have no arguement there, but they are also ALL listed with the expansion band.

We have an advert that defines a model of a watch based on the simple fact that it comes with a leather strap version and is called the Champion.

You are assuming and guessing that plain case means minus the groves. There is simply no evidence that it means that.

This watch may very well have been a Senator "A" when it was purchased, we may never know. But like the Craftsmen/Tuxedo watch, when presented in the fashion that it is presented in and with the evidence we have at hand, we should be inclined to go with what the evidence is saying at this point in time. If we come up with another advert that shows the Champion that looks similar to this watch without the groves then we will have a deffinitive answer on the matter, but until such time we should not rule out this watch being a Champion.